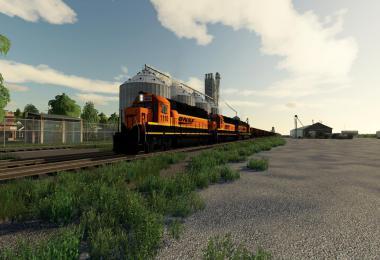 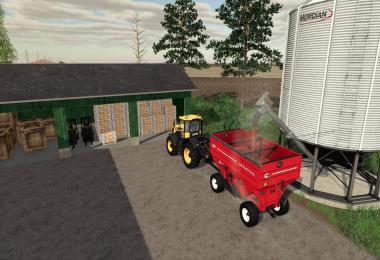 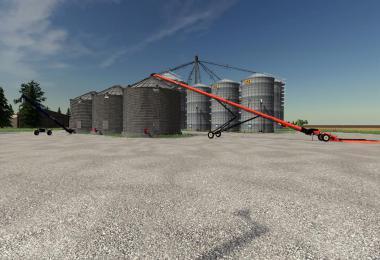 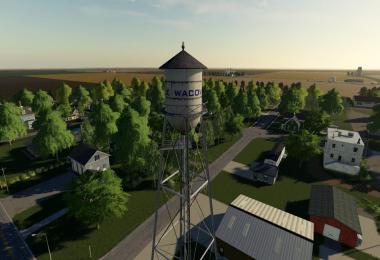 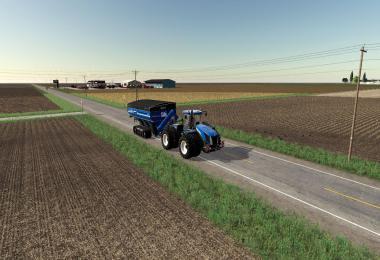 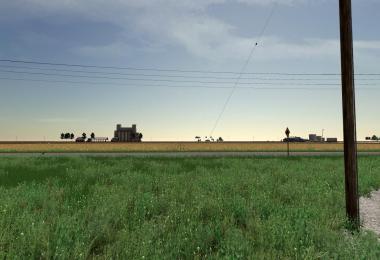 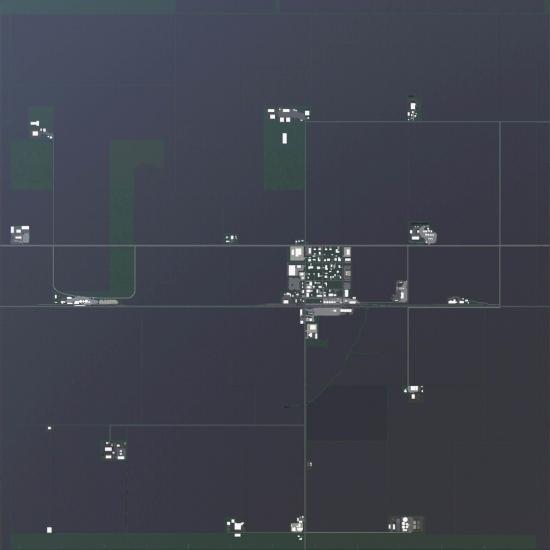 Description:
NEBRASKA LANDS USA 4X
Welcome to Nebraska Lands USA, a full featured 4x map with accurately scaled file sizes and
full Seasons compatibility… a seasonsmask has been added to the map and all placeables have
been edited to work with Seasons as well… foliage layers will change colors according to the
season and the small water runoff ponds will freeze over if the ground temps are below freezing,
and folks will have to light their fireplaces…
NEW in this map, the individual GSI bin and the individual Brock bin use the new script
from GtX to allow any grain crop to be stored in the bin, unlike before, when only one grain
type was allowed. Due to the new script, ONLY one grain may be stored at a time, to switch to
a different grain, all of the first grain must be removed first, as in real life. Standing in
front of the output auger will cause info to appear in the F1 menu, showing the graintype that
is currently in the bin, as well as the amount of that grain and the percentage full.
Also NEW in this map, never before seen in FS 2019, is true dynamic mud… there are places, such
as the water puddles around the map, where it is always muddy… however, in other places, after
a rain (and during) the ground will become muddy… this mod really comes to life when running
Seasons, as it responds to the moisture levels in the ground, more moisture equals more mud.
This map embraces the many new features of the 2019 game, much of the land is buyable, including
all the field areas as well as several wooded or empty lots around the map, even a few empty lots
in town in the business district. There are transport missions, hauling pallets of stuff from one
place to another, also field missions on most of the fields. There is no log sell point on the map
as forestry is not a thing in this area, also, no massive forests here unless you want to plant
your own.

Welcome to the heartland of the USA…
Located in the midwest, the land is flat and stretches for miles in all directions… there is rich
farmland here and land is cheap… Now you can journey to this area and enjoy the farming experience
for yourself. You begin with adequate equipment, but to work well and be successful, you must become
profitable and expand. There is no sugarcane on this map… it is not available as a crop type and
will not be available no matter what GEO is used… this is for realism as sugarcane cannot grow
here, this far to the north. Also, there is no sheep farm provided, as sheep are not really a thing
in this local area… however, if you want to raise sheep, you can always use a placeable pen.
All of your farming supplies, such as fertilizer and seeds, must be bought at the various sellpoints
(no seed or fertilizer triggers at the farms) Fuel storage is available on the farms, with a small
amount to get you started, for more, use the universal pack fuel trailer to refill from town. For
those that prefer to fertilize using anhydrous ammonia there is a dedicated sell point at the liquid
fertilizer sell point. As premiered in Emerald Coast USA, in this map, anhydrous is a specific fill
type, not the usual “liquidFertilizer” pretending to be anhydrous… this means you need specialized
equipment to use and apply the anhydrous to your fields, where once applied, it will function as
normal fertilizer.
There is plenty of work here, so enjoy farming in Nebraska Lands, USA!

• you start the game at a friend’s home in the small town, with only his wife’s custom truck to
drive around, take GOOD care of it… in “New Farmer” mode you have some nice equipment, a gift
to get you going, although you own no land or farms… in the two hard modes, you get nothing
but some money… but, land is cheap here and there are lots of opportunities to pick up some
contracts to do… work wisely…
• Get water at the town water tower for a small fee, Tri-County Fertilizer sellpoint has bulk
fertilizer for sale, and, for those production fans, they will buy excess fertilizer from you as
well… The Garden Center has herbicide available… and they accept wool and compost. Fuel is
available at the Phillips 66 station in town… Bulk seeds can be purchased at Pioneer Seeds, next
to the Garden Center… Over at Millenium Feed you can purchase premixed pigfood… and there is
a local farmer north of town who is always willing to buy whatever pigfood you want to sell. The
animal dealer always has more manure and slurry than they would like, you can get either there
very cheap… Another local farmer west of town will sell you bulk corn, oats or wheat at a cheap
price…
• There is custom traffic on this map, edited for faster speed without tinkering with the game itself
and messing up other maps… definitely do not pull out in front of them! The traffic will make
randomized choices at some intersections and even stop. Also, several vehicles are parked at various
locations (during the work day) and leave at night.
• The dealer repair bay and lobby, the granary sellpoints, the fertilizer, lime, seed and anhydrous
sellpoints and the garden center, the dairy and the rootcrop sellpoints all have timed barriers
which open at either 7:00 AM or 8:00 AM and close at either 6:00 PM or 9:00 PM… no entry is
permitted into these triggers before or after hours, the hours are posted at each facility…
• The Harvestor silos function again as fermenting silos, using the great script by Farmer_Schubi…
Ensure to have the included HarvestorSilo mod in the folder and active when first starting your
gameplay… the silos take grass, alfalfa and chaff and will slowly convert these to silage.
• Two of the bunker silos are modified to produce compost rather than silage, the fermenting time and
compacting processes are the same… The land must be purchased before using them, as well as the
BGA facility and woodchip sellpoint. They take precompost, which is produced at the Razwood Factory
south and west of town, which accepts manure, straw and sugarbeet to make the precompost for the bunkers.
• There are two of GtX’s fantastic underground storage bunkers located at the pigfarm… they hold the
rootcrops or woodchips… also using his great script, they will hold only one fruit at a time, to
put a different fruit in there, first the original must be emptied out… stand by the front to have
info pop up into F1 showing fruittype and amount currently stored in there.

Also, there is a cotton bale drop off point just south of the RR crossing, to sell your bales… Regular
straw or hay bales may be sold at the animal dealer, at the side of the office…

To use this map, unzip the NL_UNZIPME file and place ALL of the included files into your mod folder and
remember to activate them for proper functioning of the map… THE MAP WILL THROW NUMEROUS ERRORS IF ALL
MODS ARE NOT IN THE FOLDER AND ACTIVE AT FIRST GAME… the only included mod not required is the Farm
King auger, but, it is quite useful for filling the individual grain bins…

Disclaimer: this is a highly detailed map, using many different scenery objects and several custom
textures to achieve visual realism, and as such will require a strong, high spec PC to run… especially
if you have many mods on the farm. The only solution to this issue is to not use any mods and/or turn the
settings down. Additionally, to avoid unforeseen issues and conflicts, please have ONLY this map in the
mod folder as having multiple maps in the folder will cause issues as the game loads all the scripts from
all the maps, including the active one…
IMPORTANT: As this map has a built-in GEO to simulate the conditions here, in the Midwest, there is NO NEED
to use a custom GEO… in fact, issues can and may result from doing this.

There will be no “mod requests” or custom changes to the map. However, any things you don’t like or would
like to be improved will have to be for your own private editions. It is absolutely NOT allowed to edit
and upload ANYWHERE without my express permission…