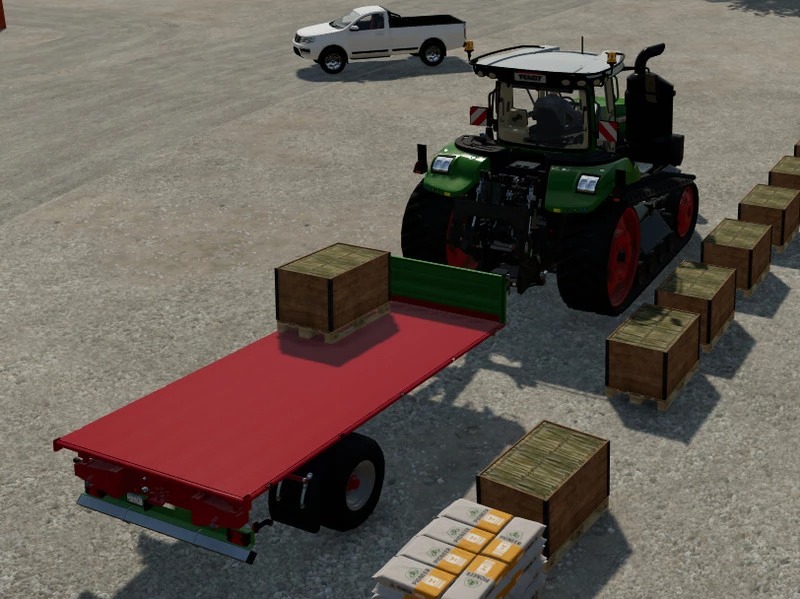 Version 0.6.4.0
– Dead weight increased, the center of gravity lowered and the loading height limited, as such a small trailer cannot be loaded so high without it tipping too much
– The distance between the pallets for loading is slightly increased so that the seed pallets still fit and do not block the next loading space with the protrusion.

Version 0.6.3.0
– Fixed bug if you do not choose any cargo after purchase. The first load is now always preselected.
– The selected load is now synchronized between the server and the client so that incorrect loading behavior does not occur in the MP.
Notice:
The fact that the pallets in the MP are not directly loaded correctly and are sometimes not displayed correctly where how effective they are is a bug from the Giants Engine.
I reported this to Giants as an error and it was marked as done with the comment “no change required”. So on that is fixed by Giants I don’t know.

Version 0.6.0.0
– Improved translations
– Pallets are now automatically loaded lengthways or crossways based on the defined loading size
– Restoration of the original SEK configurations, so it can be configured from bales to bulk goods, different loading sizes are also possible for each configuration by the modder.
– Problem of unloading with several loading wagons fixed

Important information:
This is the last version of the SEK with an integrated autoloader script.
If the tests of the next few days do not bring any more errors, the trailer is disconnected from the autoloader and then
The autoloader comes into the ModHub and can then be used by everyone as a reference Mod. So please be patient.
The most important thing is that you are not allowed to have any of the mods with the stolen autoloader scripts in the game, otherwise your savegame can be damaged.
Responsible for this are the modders who stole the scripts and not me.

Version 0.5.0.0
– Improved translations
– Bigbag pallets can now be loaded
– The last selection of the load is now saved
– Fixed server error with ‘testAction’
– Removed unnecessary output in the log file

The autoloader loads all standard euro pallets from the main game and loads 8 pallets in the first layer.
Then it stacks in height up to a maximum of 2m. Depending on the height of the pallets thus fit different numbers of pallets on it.

This is the first version of an autoloader I developed, which can be installed by any modder in their trailer when it is ready and error free. Then I will publish it on the Guthub as base mod usable for anybody. But this can’t be done unless it is error free.

Since the pallets in the engine of Giants currently specify wrong sizes and the points of the loading area can not be read, it will still take a while until this is error free. At least until the next patch of the game, where some of the pints should be fixed.
For testing purposes, I have put the autoloader mod on the SEK of GIANTS. Bute I get so many requests to publish it, that I decide to give your this beta version.

How to use:
Drive next to the pallets and then with R you can load one pallet after the other.
Make sure you have selected the correct pallet type.
The pallets are then as if loaded by hand on the loading area.
Fasten with straps before you drive, otherwise it fell of.
You can choose the unloading side and unload it.

Known issues:
– If you have several SEK and they “steal” each other’s pallets, strange effects can occur during unloading and errors can occur if these pallets were sold from a trailer.

The link is only allowed with orignal link here from Modhoster.
The change and re-publish, even in part, is prohibited and will be warned.