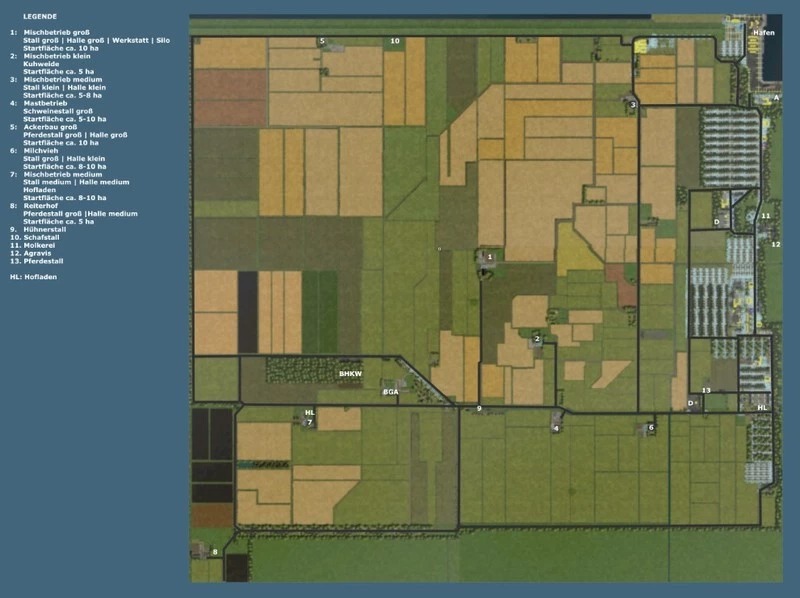 Description:
Welcome to Ostfriesland.
After several years and a version abstinence, I would like to share my map Ostfriesland with you.
This map is based on my home, the area around the city of Norden in East Frisia.
Despite a high degree of scenic conformity, plenty of artistic liberties have also been taken, which are indispensable for reasons of effort and gameplay.
In particular, the straightening of all courses, as well as the town layout were necessary to simplify the design implementation.

Equipment:
The map has a total of 7 business sites, which can be taken over as players fully equipped and expanded as needed.
In addition, existing production and sales facilities can be expanded by acquiring and placing additional designated commercial areas.
The farms range from pure dairy cattle, pig fattening and arable farms to small, medium and large mixed farms, which can correspond to real models in their local location, but are felt free in the design.
There are over 200 fields and purchasable areas obstructed, over 150 of you mission-created and entered.

Performance:
Due to the size of the (4-fold) map and the numerous components built into it, which are indispensable for a high, scenic realistic degree,
the performance requirements can be described as high. However, it is playable smoothly and without massive Fps drops with appropriate graphical adjustments,
But will certainly need a little testing for one or the other.

Release Status:
The map, as well as the gameplay are fully executable and tested over several hours, but certainly not all small bugs identified and fixed yet.
The LOG does not have any major bugs, but it does have some minor warnings that are unattractive, but do not have a major impact on game enjoyment or performance.
In this regard, the map is explicitly released in beta status, as there are still known bugs, including the still missing adjustment of the plow status in the soil condition.
However, further correction will not always be possible in a timely manner due to time constraints on resources.

Disclaimer:
– I am a private user and made this map primarily for myself, it is welcome to be shared on other sites in explicitly unmodified form.
– My big thanks go to all the hardworking modders in this community who are responsible for the many extensive mods that have gone into this map as a visually valuable component.
– I would like to state explicitly that I have not asked for all rights, so I would like to ask all affected authors to contact me immediately, if they do not allow a use in this map.