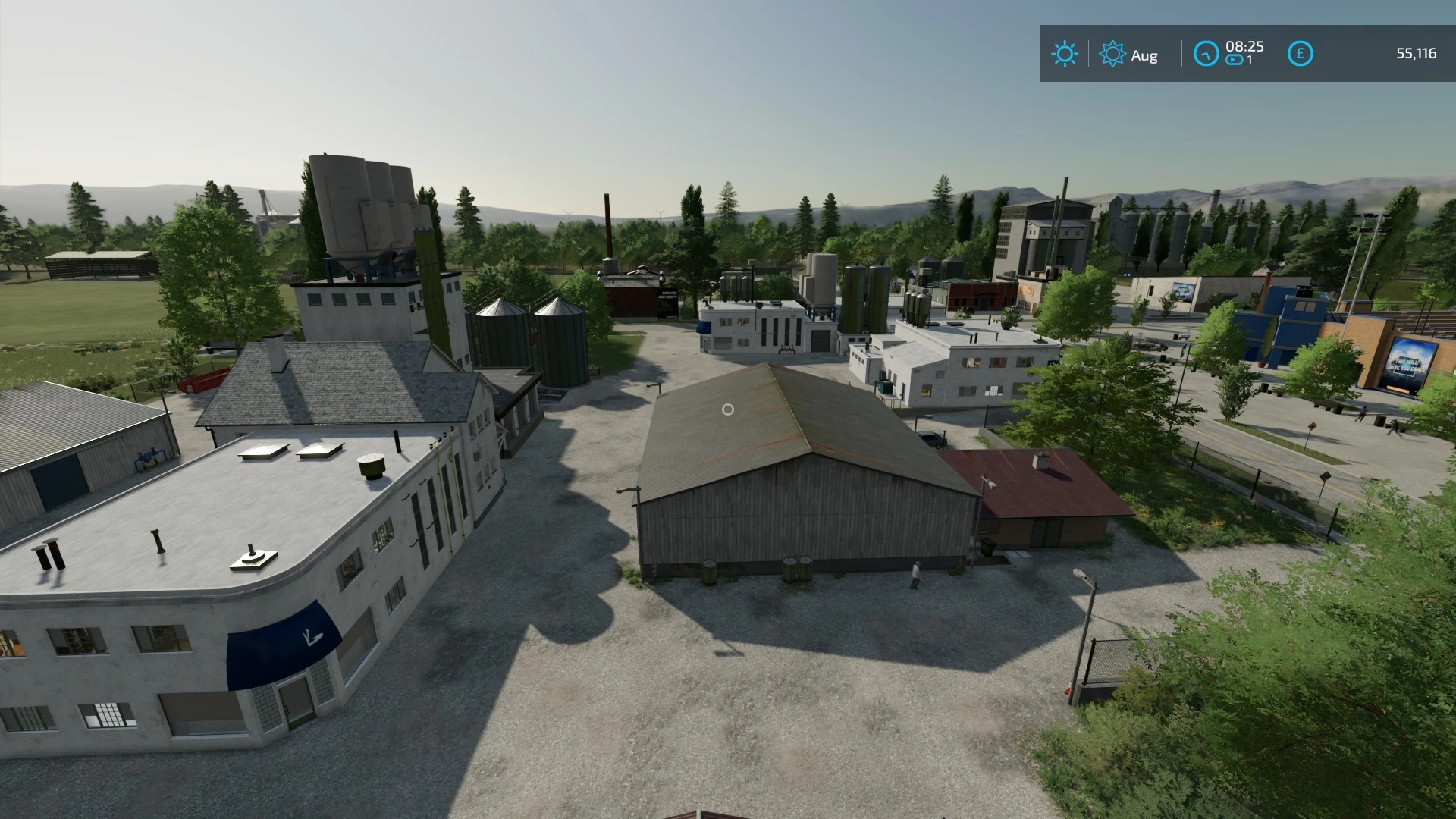 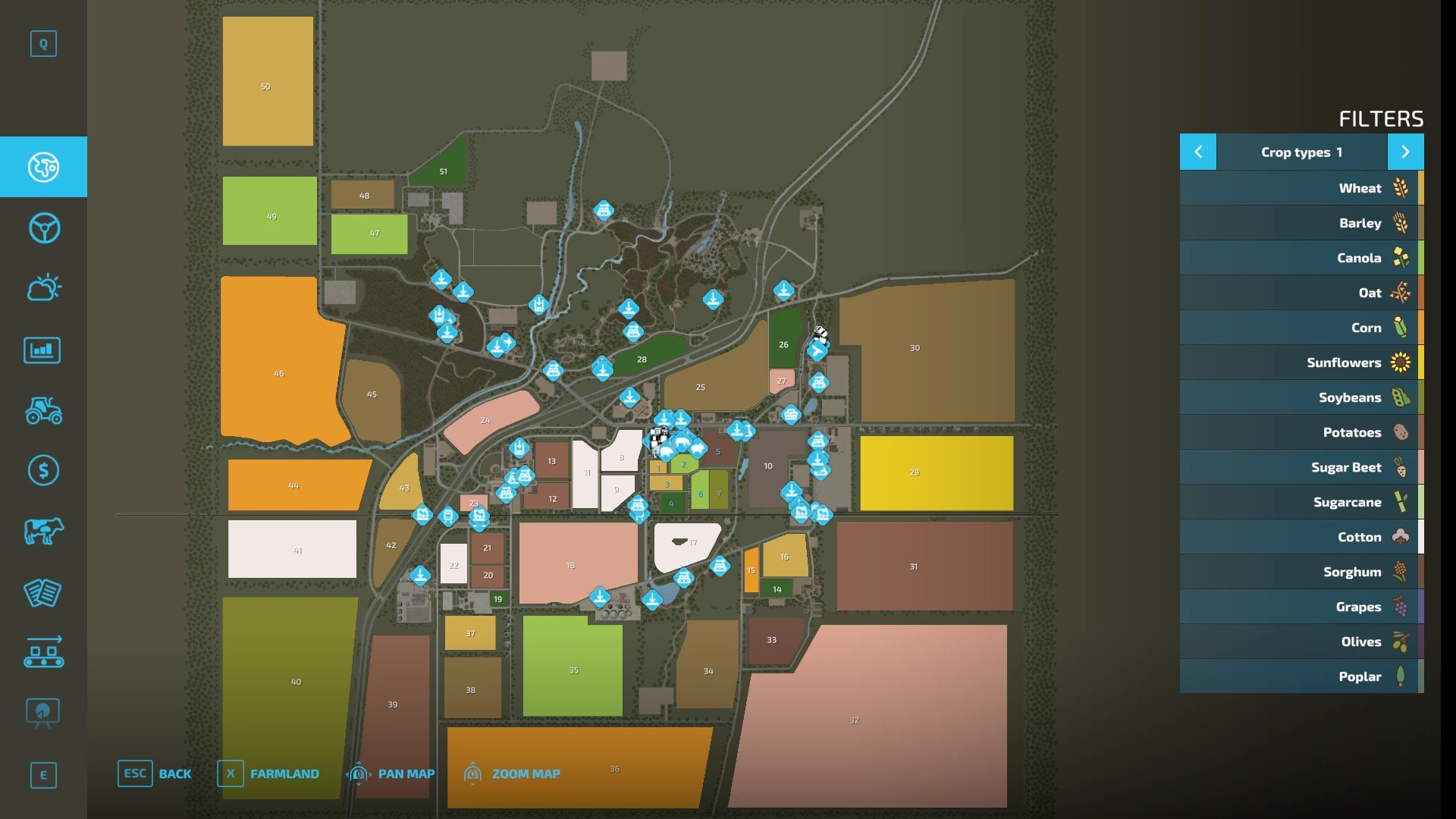 Description:
Welcome Unzip the downloaded file and place the map zip into your mods folder, you will also have a readme file to view changes and an updated production pack 1 zip for the map which is just placed as is into your mods folder.
Change Log V1.0.02
Due to all the changes and additions a new save is required but with the help of The Grain Arcade, Chris and Luke_BK we have tried to get it all done along with what I was going to do later in this one update. Multi fruit may be added after the Giants Platinum expansion is released.
Animal Food Adjusted 2nd groups added to sheep and chickens, silage for sheep, corn for chickens. Carrots added to horses washed and steamed potato added to pigs. Compost plant area adjusted, green house area adjusted. Bale triggers added to included silo’s, terrain corrected on northern highway. New free farmland added the length of the highway now allows the central reserve to be mowed and corrects the small north forest area grass. Reduced pallet work as many production fill types added to trailers or the included multi tanker. Production increased at the potato plant. Many sell point and production triggers reworked to work with the in game Ai system on the one built into map. Splines added to aid AI around the map, rigid body setting on the new roads matched to the original roads. Farm lands adjusted and cleaned up, Multi tanker fuel overloading fixed for vehicles. The new products added to the silo’s. The map has control over the train system now so you can store and sell much more via the train. Land and masks adjusted at the Grain Pool East placeable yard. Field 29 smoothed along the rail track to aid large headers and prevent missing. Collision removed from the included placeable small farm silo . Production prices have been adjusted. Prices corrected on the farm supplies. Farm house moved back 2m and the area changes. More item added to removable farm deco including the ponds to allow deconstruction, more map visual deco added and much more.
My updated Production Pack 1 is included and now includes a mineral feed production machine and a placeable wood chipper.
Remember the included multi tanker if sold by mistake can be found in the slurry tanks section of the store.
Change Log V1.0.0.1
Reserved.
V1.0.0.0
I needed more country and space than my standard size Elm Creek Edit had for the big toys so I set about creating a detailed 4x map version.
The new 4x version has all the original edits features like productions, extra foliage, grassland layer adjustment to get rid of the nasty dark brown field end mess left by machines, extra paintable foliage and ground layers, custom triggers and more. The new edit keeps the same high detail in all the new areas, the forestry is expanded, new roads and traffic, the northern grasslands are vastly expanded allowing the player to create more in the map, the 51 field areas are a mixture from small to very large boxed and shaped with missions. Many field areas can be further expanded by the player by removing trees. many placeable lots are supplied flat and empty ready to be populated by the player. Everything the maps needs is supplied in the store and construction menu. Sell points and storage amounts have been increased to allow for the larger fields and bigger mission crop amounts and much more. Have fun with the map.
To play the map as intended a high end Pc and GPU is recommended along to LOD distance set to max in the custom setting for the best visual look. Kindest regards Stevie.
Updates and mods always supplied via my Facebook page and group. https://www.facebook.com/StevieFSMods/
Donation Link: Donation link: https://paypal.me/StevieFSMods?locale.x=en_GB