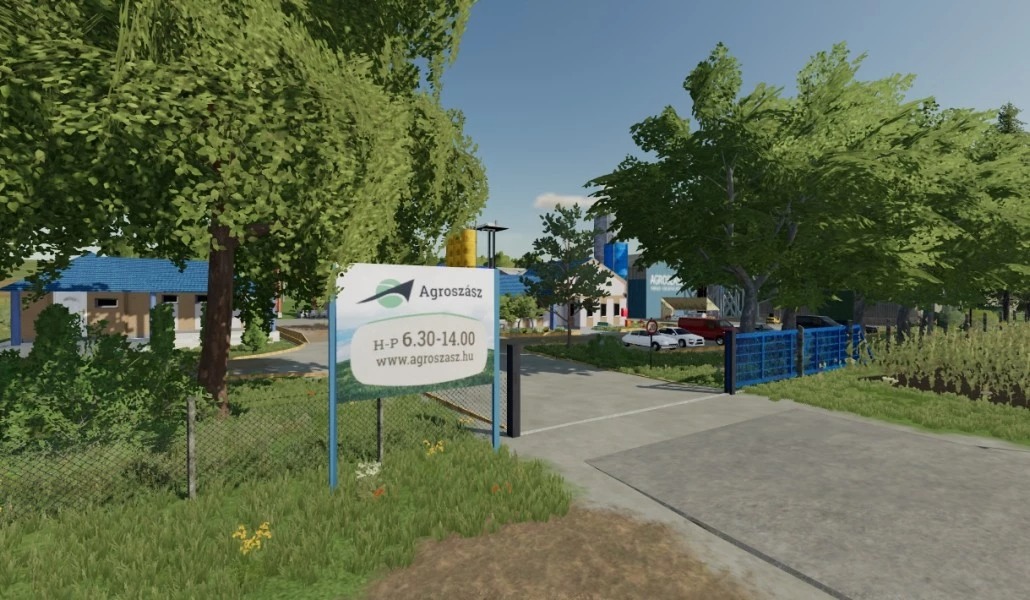 Description:
Agroszász KFT is one of my favorite maps. I made it. My name is Balázs REmapper. This is a map based on a real Google Earth map.
It was made for real, but in the end it still deserved the word Fictitious,
because Május 1 tér is not located in an appropriate real position, and quite a few buildings are not in real positions either.
As long as I was able to see the premises and based on the videos of my favorite videographer Tomi Stiumi, I could largely filter out the
site details and the positions of the animals. For example, against Dina Faipari kft
the farm is also fictitious and can be transformed and developed to your own style. Trees can be cut, but some cannot
which is not declared as an ornamental tree.
There was an FPS fix on the map, I solved the edge of the map with as few trees as possible and also placed a retaining wall,
so that everyone knows where the edge of the map is.
You can go through a few things like a ghost, but I only did that to improve FPS.
If I had left the collision in the middle (in which you can get stuck), your FPS at the beginning would not be 35-50, but 20-25, and that doesn’t matter.
It has 5 sales points.
There are also medium and large lands.
Kft. has a large Bunker Silo where you can even ferment fodder for cows.
There is a so-called Season mask, so the snow does not fall in certain places, and the spilled things do not rot.
Faipar has Carpentry and a Biomass thermal power plant, but you can also build wood processing plants that can be adapted to your own style, organized thanks to the FS22 terrain organizer, even in multiplayer.
There is also a sleep point on the course, but only if you put the mods I gave you in the mods folder, then the map will work perfectly as I set it up.
So the sleeping point will be in the FSH house at the entrance to Szászvár, where you can of course simulate sleep by the bed.
I know about 2 Warning at the track, here I want to improve the farmland as painting, but I don’t have the patience for it. This does NOT affect the game’s FPS, for example!
And there is a vulnerability related to Meadow weed that I haven’t figured out how to fix. It doesn’t affect the gameplay either.
When I started, my FPS dropped to 35 when half of the vehicles were turned from 54 during testing.
In the parts next to the site, my FPS was quite good, over 60.
There is a variety of weeds and vegetation on the course, corn growths may occur in some places, because the seeds that fell from the plateau last year are a small part, so I simulated this as well. 😉
There is also a bakery and supermarket sales point on the course.
There are 2 diesel refueling options on the track, 1 at the site and 1 at the Avia well.
With the mod I gave = Sell Wood, the wood sale works.
It also includes Earth missions. Lands can be bought and sold.
The map works perfectly together with the associated mods, so the unzip me content contains the additional mods that must be placed in the mods folder!
A 7-meter hill can be created even in a Bunker silo.
Extra multi terrain angle is in and it worked for me.
for free There is fodder in one of the buildings, and seeds are also placed there, owned by the company.
The map worked perfectly for me on version 1.6.0.0! It is worth playing with him on this version. Tested.
Good game for it!